Fast-Track Listmail is an independent, family-owned and operated business, based in Mount Horeb, Wisconsin. The company compiles, cross-matches, data-processes and markets both general and specialized direct marketing lists. They also provide a range of mailing list hygiene services such as CASS and NCOALink ® processing, merge/purge, list appending and more.

They have been involved in mailing list preparation and marketing since the early 1980s, and originally began providing move update services in 2000. They developed their own interface to use as a USPS licensee of the former FastForward system, which was later replaced by NCOALink.

Instead of renewing their own USPS limited service provider license, they instead evaluated a number of different vendors of NCOALink services, eventually selecting SmartSoft’s AccuMail Move API. Arnold Harris, the co-owner of Fast-Track Listmail, spoke with SmartSoft to explain the strategy behind his decision to switch to SmartSoft’s NCOALink API for their change-of-address processing.

“The AccuMail Move Toolkit was the NCOALink access package that best met our needs, in terms of its simplicity, ease of access, and completeness in its offering. It provides users access to all the functions related to uploading a file for remote-site NCOALink processing, tracking the progress of the NCOA processing and then downloading the processed data back into the user system. 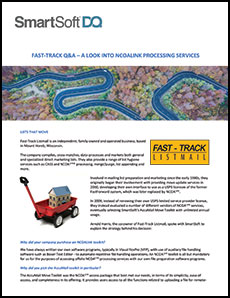 Login to SmartSoft DQ
Reset Password
Enter the username or e-mail you used in your profile. A password reset link will be sent to you by email.
Already have an account? Login
// Mailing section (page-id)